The Chicago Police Department released dash cam video of the Laquan McDonald shooting. Although most dash camera video recordings include an audio track, this did not. Concerned citizens believed that the audio portion of the video recording was intentionally deleted or altered. We previously explored why there could be an absence of audio during these videos on the blog.

In the meantime, a video of the same incident, allegedly with audio, posted on YouTube. Concerned citizens believed this genuine video included the missing audio. Primeau Forensics investigated the YouTube video and here we offer an opinion as to the authenticity of this second version of the dash cam video that included audio.

During our investigation of the YouTube video titled ‘Is this the audio Chicago Police dash cam video of Laquan McDonald shooting?’, we discovered several inconsistencies that scientifically revealed the second YouTube video is a fake. Using time domain analysis, frequency domain analysis, and critical listening skills, we have outlined these anomalies and inconsistencies below. 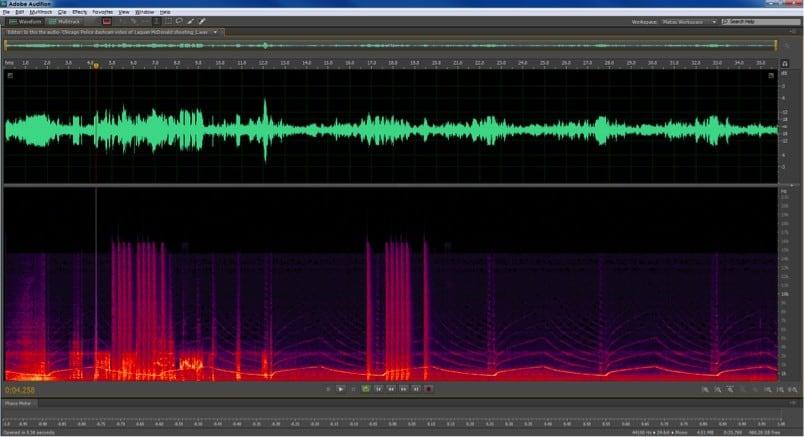 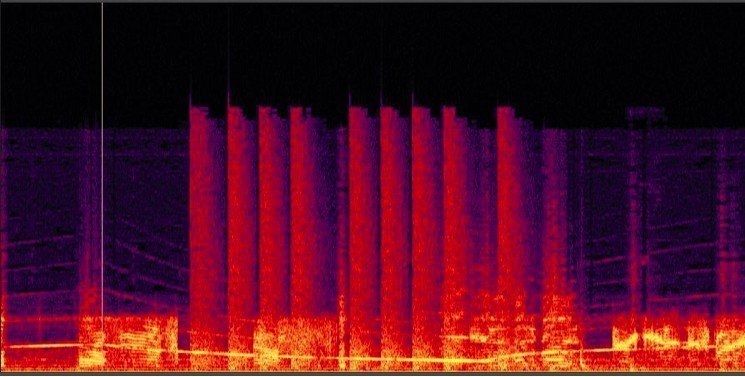 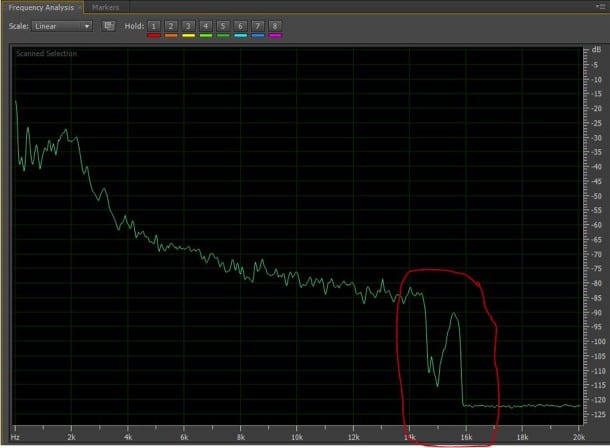 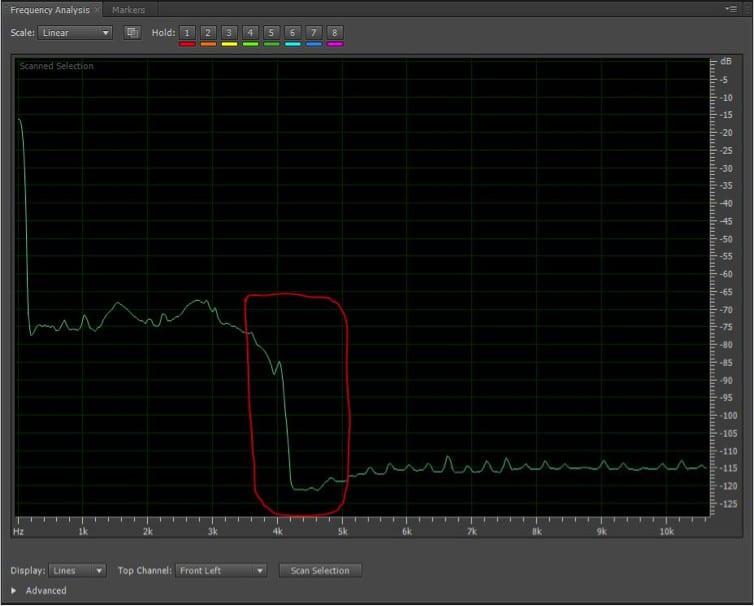 Based on forensic testing and analysis, I can confidently say that an unknown party manufactured and added the audio portion in the second YouTube video after the fact. 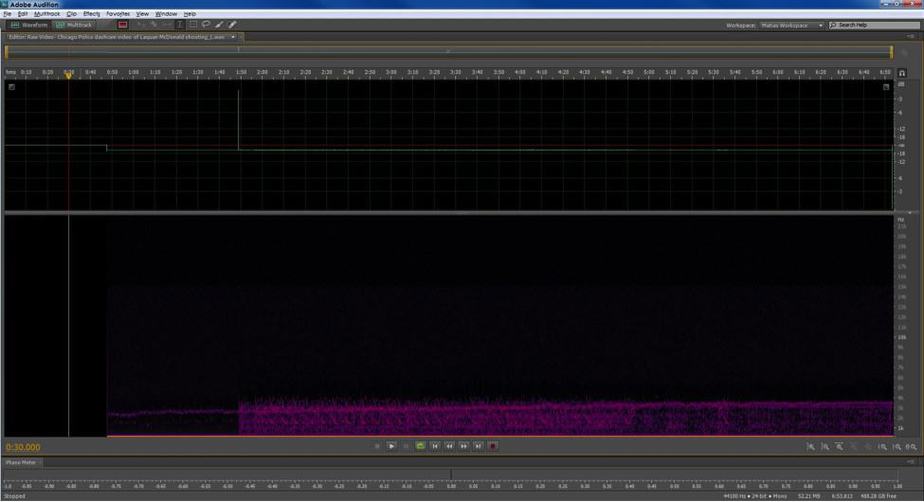 The original video contains recorded audio content of cross-talk and engine noise (see above image). The audible noises within the original video recording have low amplitude. However, they are heard with a significant increase in volume. Because this digital recorder in the police car recorded audio track, I believe the recorder was functional. Due to the lack of officer dialogue and radio chatter, we believe the on-person lavalier microphone within the vehicle was muted, disconnected, or deactivated.

The gunshots and radio chatter heard throughout the YouTube video titled ‘Is this the audio Chicago Police dash cam video of Laquan McDonald shooting?’ are duplicated, equalized, and not authentic. I previously discussed the inconsistency between the cutoff frequency of the gunshots and the background noise. In addition, the audible fingerprint of the gunshots within the spectrogram has a distinct shape, size, and intensity that are consistent with duplication or repetition. The frequency decay of the gunshot, sound of the gunshot, as well as duration of the sound are almost identical. See image below for gunshot sounds. 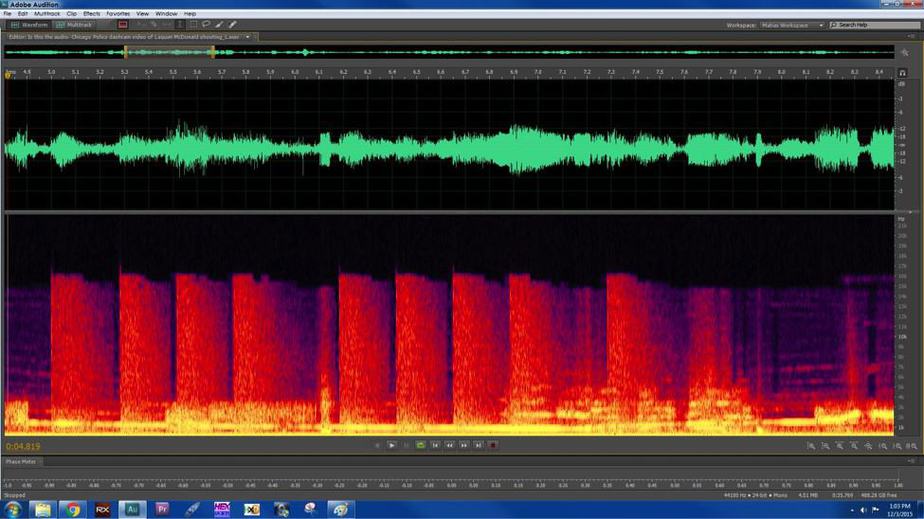 The radio chatter sample at timecode 0:04.387 (MM:SS:MS) is an exact duplicate of 0:03.000 (MM:SS:MS). And so, the conversation being spoken is identical. The differnece is that the duplicate has been processed using equalization to deceive the listener into believing it is radio conversation.

The Laquan McDonald police video with audio is indeed fake.

On November 24, 2015, police release video that captured the shooting of Laquan McDonald in Chicago, Illinois, almost 13 months after the incident took place. There has been a public outcry regarding not only the death of McDonald, but also the videos themselves.

The following blog post clarifies why there could be an absence of audio during the multiple videos released by the city of Chicago from the Laquan McDonald shooting.

The question remains, why do the videos released by Chicago authorities of the Laquan McDonald shooting lack audio? What are the sounds heard on the video recordings that sound like sirens or whining?

If you watched the videos released thus far, you hear electronic noise. The digital video recorder in the squad car recorded audio, though no audio signal was being sent to the recorder. Was this a technical glitch or did the officers not activate their body microphones? Perhaps they were all muted? Was there a problem downloading the digital recordings from each police car? Who maintains chain of custody logs for handling this evidence?

In an interview for the Associated Press, our lead digital media forensic expert, Ed Primeau, comments on the lack of audio from multiple police cars being a red flag. Additioanlly, fellow forensic expert Gregg Stuchman comments in a second interview for the Associated Press, “It’s plausible for a single squad car to have a glitch preventing sound recording.” Then how could multiple cars not have recorded audio? “I’ve never heard of it before,” Stutchman said. “It raises a red flag. The more likely explanation is that audio was intentionally switched off.”

THE NEED FOR A FORENSIC INVESTIGATION

Furthermore, a forensic investigation performed by a neutral, independent forensic expert can determine the reason for the absence of police dialogue and radio communication in the Laquan McDonald shooting. Primeau Foresnics has examined thousands of police dash cam systems. Some include audio, others do not. There are three methods of activating dash cam video and audio.

Either way, officers have the ability to mute or deactivate their body microphone transmitter. However, the car microphone almost always remains on.

The Associated Press asked Primeau Forensics to examine a YouTube video of the Laquan McDonald shooting that has audio. After careful forensic examination, Ed Primeau concluded beyond a reasonable degree of scientific certainty that the audio track on the video lacks authenticity. Careful analysis of the audio spectrum contained on the video indicates many signs of post event alterations.

Most importantly, we hope this blog post about dash cam video and audio surveillance recordings clears up any misconception about the absence of audio on the Chicago Police dash camera videos.